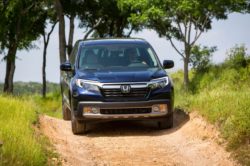 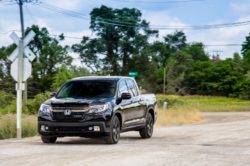 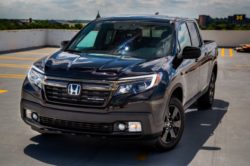 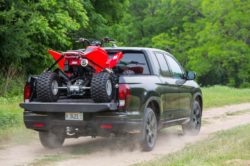 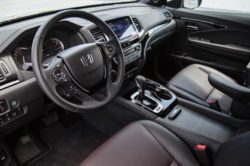 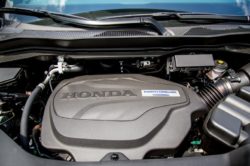 When it was introduced, the first generation of the Ridgeline was selected as one of the best trucks on the market. However, it was not all that successful mainly due to its odd design and sub-par technology used on the truck. The second generation, the 2017 Honda Ridgeline, on the other hand, is a much better package than its predecessor. Unlike most of their competitors, Honda decided to use the same type of construction that can be found on the older model. This means that the new Ridgeline features a unibody design which is very similar to a car rather than a truck.

Like before, the truck features a lot of things in common with the Pilot. Pretty much everything in front of the C-pillars is shared with the previously mentioned crossover. However, most of the parts behind the C-pillars and some other chassis components had to be strengthened to be used on the truck. Like before there is only a single configuration for the new Ridgeline. The truck can be had as a four-door truck with a bed of 64 inches. This is not exactly a bad thing, though, especially since the truck starts at roughly $30,000.

Like we previously mentioned, the new 2017 Honda Ridgeline is pretty much identical to the Pilot in the front. Here the two share the same headlights, bumper but with a different grille. The back is a bit more interesting on the Ridgeline. The truck features a rather large bed which is longer and wider than any other standard bed on a mid-size truck. This allows it to carry a four-by-eight-foot sheet of material flat on its floor which is quite impressive for the size. On top of that, the bed features a couple of storage spaces on the sides as well as a floor-mounted trunk. This houses the spare tire as well as it offers a good amount of space for valuables. The two-way tailgate has a set of speakers included which are waterproof, so it might become the perfect truck for a party in the woods.

The dashboard, steering wheel, instrument cluster, navigation and infotainment system and even front seats are all identical to the Pilot. However, the gear selector is now a regular lever which should allow it to be used with gloves with more ease. The rear seats can be folded down and the back of the cab open in order to haul longer than usual items inside the bed. The quality of the materials is on par with its sibling and there is quite a bit more room than in its competitors.

The new 2017 Honda Ridgeline is being powered by a 3.5 liter naturally aspirated and direct injected V6 petrol engine. This puts out 280 horsepower and 262 lb-ft of torque which is less than the competition. However, the truck is also much lighter than any of its direct rivals. The engine is then mated to a six-speed automatic gearbox which sends the power either to the front or to all four wheels. The front wheel drive version of the truck will hit 60 MPH in 6.6 seconds which is more than a second faster than the second fastest medium size truck out there. On top of that, it can get up to 28 MPG on the highway at speeds of up to 75 MPH which is quite a bit better than any of its petrol-powered competitors. The only real drawback here is the towing rating. When equipped with the all-wheel drive system, the truck can only haul up to 5,000 pounds which are considerably less than the competition. However, if towing is not as important then the Ridgeline is one of the better trucks out there!

The new 2017 Honda Ridgeline is being powered by a 3.5 liter naturally aspirated and direct injected V6 petrol engine. This puts out 280 horsepower and 262 lb-ft of torque which is less than the competition. However, the truck is also much lighter than any of its direct rivals. The engine is then mated to a six-speed automatic gearbox which sends the power either to the front or to all four wheels