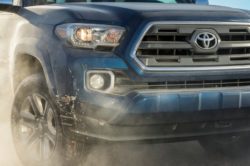 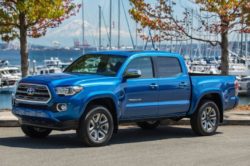 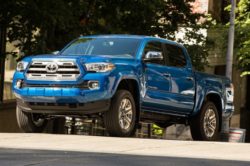 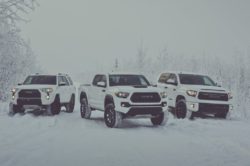 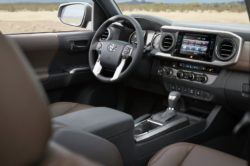 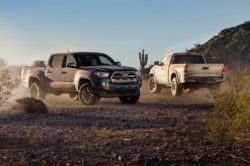 The all new Tacoma has been launched back in January 2015 and it is a completely redesigned model over the previous generation. Despite that it still has some of the DNA found in the Hilux which makes it one of the most rugged medium trucks on the market. Despite being quite new, the truck already received a small update with the 2017 Toyota Tacoma which has been showcased back in February. The biggest change over the 2016 truck is the addition of the all-new TRD Pro version. This has been offered in the previous version of the Tacoma and it will be now available on the new truck as well.

Like before, the TRD Pro is the high-performance off-road version of the truck. This gets an improved suspension system, new wheels, a tweaked transmission and a few other upgrades inside and out. There is only a small issue with the Pro and that’s the price. While the previous model was priced from $37,000, the new one starts at nearly $42,000 which is already dangerously close to the Raptor. This rather large price increase is there because Toyota added a second TRD version with the Off-Road model. This starts at just $34,000 and comes with a lesser suspension system, a narrower track, and different exterior inserts.

The new 2017 Toyota Tacoma TRD Pro is the best equipped Tacoma money can buy from a dealer. This comes as standard with front and rear lights black bezels, LED fog lights designed for off-road, TRD badges, a one-inch lift over the TRD Off-road model and even more over the base truck. On top of that, the truck also gets a thick aluminum skid plate and FOX Racing shocks, the same kind that can be found on the Raptor. Options include the TRD springs which are unfortunately not available as standard. These should make the ride more controllable and they should allow the Tacoma to be much better at high speeds.

Inside the cabin, the 2017 Tacoma is pretty much identical to the 2016 model. The TRD Off-road model is pretty the same as the regular top end Tacoma. However, the TRD Pro is a bit more different. This features unique stitching on the seats and inserts around the cabin for a nicer look all around. However, the actual equipment level is the same as that of the regular Tacoma so the changes are cosmetic at best.

While the usual Tacoma is also available with a base 2.7 liter inline 4, the new 2017 Toyota Tacoma TRD Pro and TRD Off-road can only be had with the 3.5 liter V6. This is a naturally aspirated and direct-injected mill which runs in a modified Atkinson cycle, so it is more efficient than your regular truck powertrain. However, it only makes 278 horsepower and 265 lb-ft of torque which is at the bottom of its class. This makes it one of the slowest trucks on the market. The good part is that the engine can be mated either to a six-speed manual gearbox or to a six-speed automatic. This makes it one of the very few trucks to offer such an option. In any case, it will hit 60 MPH in around 7.9 seconds while having a top speed of 113 MPH. The EPA rated the Tacoma at 18 MPG in the city and 23 MPG on the highway. The TRD version will likely be slightly worse than that on the highway due to its chunky tires. Like before, the actual towing capacity of the truck is 6,800 pounds which are quite good considering the engine which is not the most powerful out there.

You will get caught. viagra pills Dark web buyers are routinely charged.