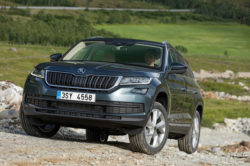 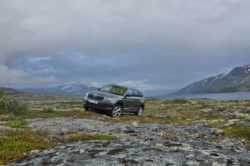 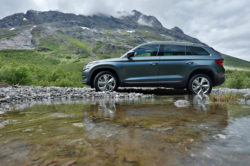 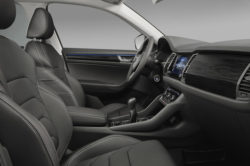 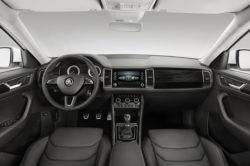 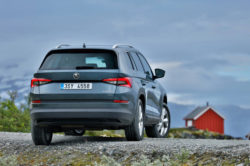 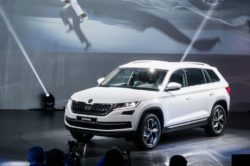 While not that well known, Skoda has been building crossovers for a while now. They had the Yeti as well as the Octavia Scout which were both quite well received. However, they were in desperate need of a true crossover in order to compete with rivals like the Sorento or the Santa Fe. Well, it finally seems that they will be releasing their first true crossover with the 2017 Skoda Kodiaq. This has been rumored for a while now and quite recently it has been spied testing with very little camouflage on it. The car is going to be based on the same MQB modular platform as the latest Tiguan, so it will employ all the weight saving techniques used on that car as well.

Like with most other Skoda cars, the Kodiaq will continue to have a VW correspondent, in this case, being the Tiguan. Like the Tiguan, the car will be offered in an either a five or a seven seats configuration and in two different wheelbases. This is because all of its rivals offer either five or seven seat models, so it will have to face some tough competition. However, it seems that not all markets will receive both models. For example, the UK market may only get the seven seat model as the five seat spot is currently taken by the Octavia Scout. The price of the upcoming Kodiaq is still unknown at this point but we, like many others, hope for it to be around 10 to 15% cheaper than the equivalent Tiguan. This would make it a great buy for pretty much everyone looking for a crossover.

Why will it be a great buy? Well, because the 2017 Skoda Kodiaq should feature pretty much the same cabin as the Tiguan, and the same features, while costing less. This has been Skoda’s main selling point in the recent years and we don’t see any future changes here. The dashboard will most likely be very similar to what can be found on the Octavia. However, expect it to be offered in slightly better trim levels with more features and even better materials than its sedan sibling.

The best part about the Kodiaq is that it looks amazing! Skoda did release a concept a while ago with the Vision S. They said that the car previews their future models and it seems that they were right. The Kodiaq looks like the production version of that car. Its front end is all new and while it still includes all the usual Skoda design traits, it also comes with a few unique design notes. The back is quite similar as well. It borrows from the Tiguan but it looks more aggressive with a small roof-mounted spoiler and nicer bumper design as well.

Like with most other VW products, the upcoming 2017 Skoda Kodiaq should feature a combination of engines and transmission. So far Skoda said that the car will receive three different petrol engines and two diesel offerings. They didn’t say which engines it will get, though. However, the car will most likely be available with a 1.6 or a 2-liter diesel and with a range of 1.4, 1.8 and 2-liter petrol engines. These are currently being used on pretty much any other VW, Audi, Seat or Skoda car and offer outputs ranging from as low as 110 to more than 230 horsepower. In any case, a six-speed manual should be standard while a DSG automatic should be an option. Front-wheel drive will be standard while all-wheel drive should only be made available with certain engines. A hybrid consisting out of a small 1.4 liter turbocharged petrol engine and two electric motors offering 222 horsepower is also a real possibility.

As the Paris Motor Show 2016 is getting closer we gathered new photos and official info about 2017 Skoda Kodiaq.

Like with most other VW products, the upcoming 2017 Skoda Kodiaq should feature a combination of engines and transmission. So far Skoda said that the car will receive three different petrol engines and two diesel offerings. They didn’t say which engines it will get, though. However, the car will most likely be available with a 1.6 or a 2-liter diesel and with a range of 1.4, 1.8 and 2-liter petrol engines.