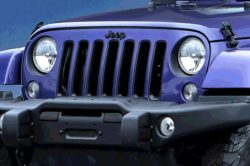 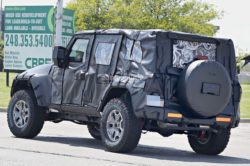 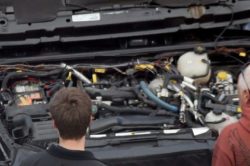 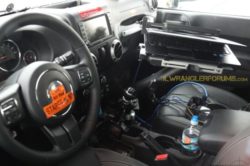 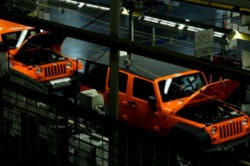 The Wrangler received incremental changes so far which kept it up to date but didn’t really allow it to shine. The upcoming 2018 Jeep Wrangler should change all that. The new model is expected to be showcased in the mid of 2017 and it will be the first all-new Wrangler in nearly a decade. The car will still be based on a classic ladder chassis on which a body will be bolted on. This will allow Jeep to keep the off-road characteristics of the car at an all time high. There is still very little information about the rest of the vehicle but some inside sources did say a few things about it.

Firstly, this will be the first Wrangler to use an aluminum body. So far it still is unclear about how much of the body will be made out of aluminum. However, considering the latest rumors, it still that part of the body will continue to be made out of steel. The fenders, hood, window frames and doors, on the other hand, are all expected to be made out of aluminum. The chassis is also going to include a much higher content of high strength steel. These upgrades alone will definitely allow the new Wrangler to shed at least a few hundred pounds. Luckily, the aluminum construction won’t mean an increased price. It seems that the price might be kept around $25,000 for a base model which would be quite good.

The 2018 Jeep Wrangler spied testing a few weeks ago looks to be a finished car. The chassis will be similar to the ongoing model. However, the car will have a few significant changes in order to allow the installation of an entirely new transmission. On top of that, thanks to the massive weight loss, new engines might be in store. The base Wrangler is still expected to hit the US market with a 3.6 liter naturally aspirated V6. This would be an updated Pentastar with as much as 320 horsepower and over 270 lb-ft of torque. Some also suggested that besides this, a 2.4 liter turbocharged engine might be added at a later date. With close to 300 horsepower and 300 lb-ft of torque, this should be a great alternative.

However, at this point, Jeep only said that the V6 will be the only offering for some time. Closer to 2019 they should add the second engine to the range. Also, after 2023, a diesel engine will definitely be added to the US model. This is a bit late considering that the European version of the Wrangler featured a diesel for some time now.

One of the largest unknown factors at this point is the interior of the upcoming 2018 Jeep Wrangler. The ongoing generation of the car has a rather old-looking dashboard with a lot of vertical surfaces. The new one should offer a more modern approach with nicer materials as well as an easier to use interface. As it stands, the Wrangler might get a minimalistic interior with only the basic necessities. However, it will definitely have some design cues in common with the latest Jeep models.

Unfortunately, the new Wrangler is not made just out of improvements. Two of the greatest things about the current car will be gone. The removable windshield and the removable doors will be replaced by fixed ones. This is in order to keep the car meet the latest safety standards. Also, a soft-top model is no longer going to be offered due to the same reason. Instead of the usual soft-top Jeep might offer a hard-top version with a removable rear roof. Also, the front of the car will change quite a bit with a larger bumper designed to protect pedestrians.

Unfortunately, the new Wrangler is not made just out of improvements. Two of the greatest things about the current car will be gone. The removable windshield and the removable doors will be replaced by fixed ones. This is in order to keep the car meet the latest safety standards.