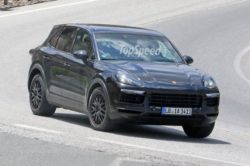 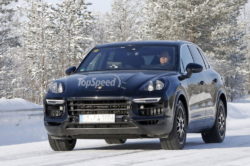 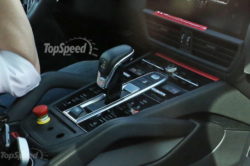 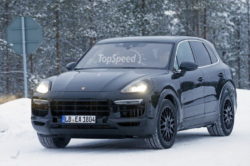 The second generation of the Cayenne is arguably one of the best crossovers ever made. It perfectly combines the on-road capabilities of a sports sedan with the carrying capacity of a large crossover. However, being released in 2010 the car is getting old and it is in need of an update. It’s sibling, the Q7, already received its major makeover and it is time for the all new 2018 Porsche Cayenne. Like all the other large crossovers of the VAG’s group, the new Cayenne will be using the MLB Evo platform. This highly modular chassis will be made out of aluminum for the Cayenne.

Thanks to it, the structural rigidity of the car should increase quite a bit. Also, it might get around 200 pounds lighter which will translate in an even better balance. Unlike its siblings, though, the new Cayenne might not be as dramatic as we hope. Instead, Porsche might just update the platform, some of its engines and call it a day. They did this in the past and they may do it in the future. So far their plans for the new model of the Cayenne haven’t been released. However, the car has been spied testing numerous times and it seems to be quite special.

For starters, the new 2018 Porsche Cayenne will definitely be slightly wider than before. Also, the wheelbase, length, and height all seem identical to the ongoing generation. The test mules also feature wider wheels than the regular models and also all of them were lower to the ground. We are quite sure that Porsche won’t get the suspension lower with fixed shocks. Instead, the new Cayenne will most definitely feature, as standard, adaptive air-shocks. These should allow the driver to modify the car’s height to its own liking. On top of that, with this generation, the Cayenne should also receive a rear-biased all-wheel drive system. This should improve the way it drives by quite a bit and it should finally allow the car to beat the BMW X5 at its own game.

The interior and exterior of it are both going to be a very similar story. As we said, we don’t expect any dramatic changes for either of the two. On the outside, the new Cayenne might borrow some cues from the Sports Turismo concept such as the bumper intakes or the headlights. However, besides that, the new Cayenne will mostly look like a refresh of the ongoing generation. The changes will be a bit more clear inside the cabin. Here there are going to be a lot fewer buttons than before. Also, it and the Panamera should be pretty much identical which is great as the 2017 Panamera has one of the best interiors in the executive car segment.

Due to its rather large weight loss, the upcoming 2018 Porsche Cayenne might get to use a new 2 liter turbocharged engine. Many people said that this is highly unlikely as the Macan already sports such a powertrain. However, considering how much experience Porsche has with hybrid powertrains, the new Cayenne might offer close to 400 horsepower from a 2liter engine and a set of electric motors. This has yet to be confirmed but it is not unlikely. A 2.9 liter twin-turbocharged V6 will replace all the previous engines which offered between 300 and 450 horsepower. Also, the top end model of the car will now get to use a 4 liter V8 with twin turbochargers and more than 600 horsepower. All of these should make use of the same 8-speed automatic gearbox as the new Panamera. A diesel has yet to be confirmed at this point but considering VW’s position, we might never see a diesel again in a Porsche, or at least not in the US!

Due to its rather large weight loss, the upcoming 2018 Porsche Cayenne might get to use a new 2 liter turbocharged engine. Many people said that this is highly unlikely as the Macan already sports such a powertrain. However, considering how much experience Porsche has with hybrid powertrains, the new Cayenne might offer close to 400 horsepower from a 2liter engine and a set of electric motors.