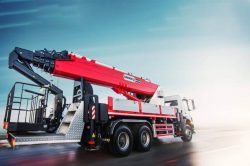 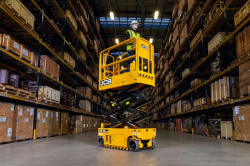 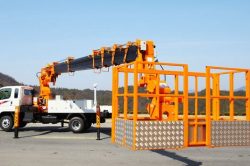 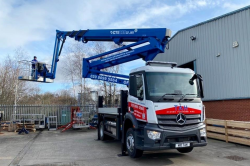 There comes a time when you need to do some work that well above the ground level. However, as we all know, sometimes it isn’t easy or safe, or in some cases even possible to use ladders to reach whatever it is that you have to reach. What are your options in situations like those? Let’s say, for example, a cat is stuck on a tree or you’re placing windows on a really high building – what do you do? You can’t fly or use ladders, so you have to find another way. Well, luckily for all of us that can’t fly there are aerial platforms.

What Are Aerial Platforms?

Aerial platforms are machines that help us reach a great height with ease and utmost safety. Whether you’re washing windows or saving a kitten from a tree, these platforms are there to help.

Considering how there are many occasions and situations in which we might end up needing an aerial platform, there are several types of these machines. All of them are different in their own way and they’re used in different settings for different work, but they all essentially do the same thing – some are just better suited for certain situations.

Most commonly used are scissor lifts and spider booms.

What Are Scissor Lifts And Spider Booms?

Scissor lifts have been named in such fashion because of the mechanism they use to raise the platform – which resembles scissors. They are most commonly used for indoor work, for instance, in warehouses. It’s not uncommon to see these machines outside, as well, but they’re not as effective out in the open. The biggest drawback of these machines is that they can’t reach that far, especially horizontally. They only move up and down and their reach is rarely over 20 meters.

Spider platforms on the other hand are more versatile in every way. They’re called spider platforms because of the ‘legs’ it uses to keep steady on rough terrain. They’re well suited for both indoor and outdoor work, but they’re rarely found inside, mostly because there’s no need for them. They have far greater reach, both vertically and horizontally than the scissor lifts and they’re a much better option if you have to move around while you work.

Are There Any Alternatives?

However, both of these options have a major disadvantage. They lack manoeuvrability and reach – especially the scissor lifts. So, what do you do in those cases? What if you need a platform that can easily move around and reach the heights of up to 50 meters or even more?

Well, for starters, you look for something with a set of wheels. Granted, both of these have wheels, but you can’t really drive them anywhere you want. You can drive them to the ramp to load them up in a truck and transport them to the job site. However, you can see how inconvenient that can turn up to be. What if you could use the best of both worlds? What if you could use manoeuvrability of a truck and the reach of an aerial platform – at the same time? Well, according to one of the experts in the field, cpslift.com – you absolutely could.

Truck mounted platforms can be attached to the back of any truck to transform it into a complete versatile beast of a vehicle. Not only will you be able to eliminate transportation of the regular booms and lifts, but you’ll also get so much more. Let’s quickly take a look at some of the major benefits of the truck mounted platforms.

Obviously, one of the greatest advantages and benefits of having a truck mounted boom is the ability to move around. Not only will you eliminate transportation of the equipment from one place to another, but you’ll also be able it far more precisely and with greater ease. Rough terrain should pose no problems for a truck, nor will a narrow street. Granted, you won’t use this for any indoors work, but you already have just the right equipment to use on the inside.

As we’ve mentioned, scissor lifts or regular booms lack vertical reach, which makes them useless in some situation. There is no way to use a scissor lift to work on something that’s 50m above ground. However, reaching heights of over 55 meters should be a piece of cake for a truck mounted boom. That makes this an absolute champion for aerial work.

As we’ve mentioned, scissor lifts have a horizontal reach as big as your wingspan. Truck mounted platforms on the other hand can reach anywhere between 10 to 40 meters. That means you could easily work on any area of a 10 story building by just parking in front of it. That would not only make your job easier, but it would save you a lot of time as well.

Another thing in which these machines absolutely dominate the competition is their lifting capacity. Granted, lifting heavy objects isn’t something these machines are specifically designed to do, there are others that do that, but still, these machines can lift up to 600 kg. That means, this could easily support 6 grown human beings, which would make it more than suitable for rescue missions that firefighters do on a regular basis.

Some of these machines can also be used to provide negative reach function, meaning they are able to provide below-ground access, which could be more than useful in jobs like pipework installation.

Since the lifting capacity is so large, it would only be natural for a platform basket to be larger as well. This implies a more comfortable work environment, more space for easier movement and less interference if there’s more than one person in the basket.

It goes without saying that truck-mounted booms are much safer than, for instance, ladder or rope. We mention rope, because, one of the obvious jobs that could benefit from this machine is window washing, which sometimes involves rope suspension for really tall skyscrapers. If used correctly these pose no safety hazards.

As you can see, these machines are very useful and have a lot of applications. Next time you’re in need of some aerial assistance, this should definitely end up being considered.