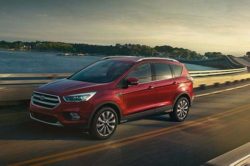 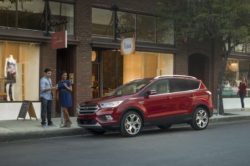 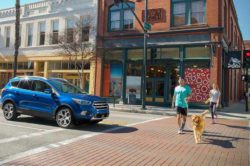 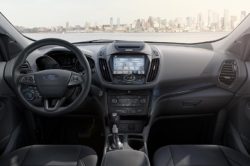 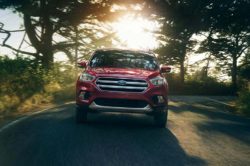 Even though the Escape hasn’t been excessively redesigned with the 2017 Ford Escape facelift, the small changes Ford did are more than enough to make it a great buy. It now comes with better equipment levels, a nicer interior, and a better overall design which certainly appeals to a larger part of the market. Unfortunately, its major drawbacks haven’t been addressed. The car still feels slow in comparison with many of its rivals and its fuel efficiency is at the bottom of its class. Despite that, the Escape is the best-selling Ford after the F-150 truck which is no easy feat.

There are two new engines in store for this update and on top of that, its gearbox has been revised as well. Most of the car’s running gear though is the same as before. The suspension system usually offers a very compliant ride which can easily be controlled. Also, it absorbs small bumps just fine and at higher speeds, the Escape is usually above the average of its class. Unfortunately, its off-road capabilities are barely average but this should still be enough as pretty much all of its buyers will use it on the road. The car is already available for sale across the US and it starts at little over $24,000. This makes it slightly more expensive than the competition but the car also has more to offer in many cases.

As we mentioned above, one of the largest changes for the new 2017 Ford Escape has to be its design. The car no longer looks like a sad copy of the European Kuga. Instead, Ford went for a design mostly inspired by that of the new Explorer. The entire front end has been changed. The car now features new fenders with wider wheel arches, a new and more aggressive bumper as well as a new grille.

This features three large horizontal slats identical to those on the Explorer. The headlights shrunk in the process for a more aggressive design as well and the end result is a much better-looking crossover. At the back, the changes are not as striking. Instead, the car has new tail lights as well as a dual exhaust system for the two top end engine options.

The dashboard of the car has been slightly revised as well. It now comes with a larger eight-inch screen for the infotainment system. The top end models now get the optional Sync 3 which is far superior to the older model. Also, the materials on the dashboard are better while the seats offer better side support through larger bolsters.

The base model, the S version, of the 2017 Ford Escape still gets the same 2.5 liters naturally aspirated engine as before. This is by no means powerful or that efficient. However, it is one of the more reliable units out there and that makes it a great choice for fleets. The other two engines, on the other hand, are all new. The 1.6-liter unit has been replaced by a smaller 1.5 liter EcoBoost inline 4. This now makes 179 horsepower and 177 lb-ft of torque. This is barely adequate for how heavy the Escape is.

Also, the fuel efficiency is not that good even though the EPA rates it high. The better choice is the 2 liters turbocharged mill. With 245 horsepower and 275 lb-ft of torque, this is by far the most powerful of the lot. It is also smoother than the older 2-liter unit and more efficient. In fact, it can usually achieve the same numbers as the smaller 1.5-liter engine. The 6 speed automatic from the older model has been carried over unchanged but it should be replaced soon by a new 9-speed unit.

The base model, the S version, of the 2017 Ford Escape still gets the same 2.5 liters naturally aspirated engine as before. This is by no means powerful or that efficient. However, it is one of the more reliable units out there and that makes it a great choice for fleets.