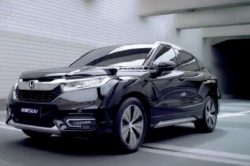 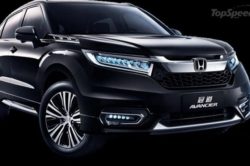 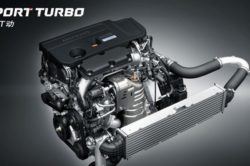 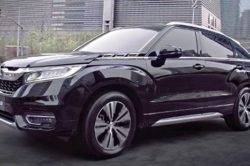 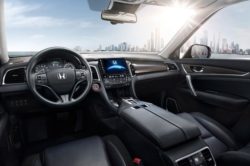 Back in 2015 Honda was releasing the Concept D, their idea of a flagship for the Chinese market. A year later they released the 2017 Honda Avancier which is only going to be sold in China. The car is actually using the same platform as the CR-V but it is marketed above it. It features more equipment, inside and out as well as a more powerful powertrain. Its price has not been revealed just yet but it is worth mentioning that its competitors are more expensive than the CR-V by around 10 to 30% which is a notable difference for sure.

As we previously mentioned, the Avancier is actually using the same platform as the ongoing CR-V. This is a rather interesting piece of information considering that the CR-V will be moved on an entirely new platform in the near future. Until then, though, the Avancier is pretty much the best SUV Honda has to offer. The car will be offered in China starting with the second half of the year and at first, it will only be offered with just a single powertrain. As you would expect from a more expensive car, the Avancier also features a slightly better running gear. While Honda hasn’t said what the actual upgrades are the car is most likely more comfortable in order to account for the extra cost.

Like we previously mentioned, the 2017 Honda Avancier will hit the Chinese market featuring only one engine choice. This will be Honda’s new 2 liters in-line 4 called the “Sports Turbo”. This engine is most likely quite similar to that on the Type R. However, it actually makes 268 horsepower and 370 N*m of torque which is better than many of its competitors. This engine is, in fact, the only 2 liters turbocharged mill in its class which should make it more sought after than the competition.

Some rumors also suggest that the base version of the car would actually get a 2.4 liter naturally aspirated engine. This has been used before in cars meant for the US market and it should make closer to 180 horsepower and 180 lb-ft of torque. The 2-liter engine will come equipped with a nine-speed automatic gearbox which will send the power either to the front or to all four wheels. The 2.4-liter mill, on the other hand, is actually expected to receive an older 6 speed automatic and front wheel drives only. A hybrid is a real possibility as well as it would allow the Avancier to compete with a much wider range of cars.

Its design is quite interesting, to say the least. However, because they don’t sell Acura cars for the Chinese market, Honda managed to inject a lot of the styling found on current Acura cars on the 2017 Honda Avancier. Its front end is strikingly similar to an Acura with the diamond-shaped headlights and the rather aggressive grille. Over the CR-V, the Avancier looks to be slightly wider and it also features a raked roof towards the back, similar to what the BMW X6 has. The wheels and most of the inserts on the exterior are all new as well.

The cabin of the car has nothing to do with its smaller brother, the CR-V, and that’s great. The entire dashboard has been redesigned from scratch and the cabin now uses much better materials than before. Instead of cheap plastics, the interior offers plenty of leather, some aluminum as well as soft touch materials. The driving position is rather low for an SUV and with the help of its highly supportive seats the Avancier should offer a nearly perfect driving experience for its class.

The Avancier is imagined to be Honda’s flagship ford Chines market. Based on the CR-V platform, Avancier has a lot in common wit CR-V, but it will also have a lot of differences. A major one is, because Honda doesn’t sell Acura’s in the China, the front grill that will have a lot of Acura’s design. Interior will be improved in all of the segments, only the best material will be used, and that will be on of the main advantages of this car.
It will be powered by Honda’s new 2 liters in-line 4 called the “Sports Turbo”. This engine is most likely quite similar to that on the Type R. However, it actually makes 268 horsepower and 370 N*m of torque which is better than many of its competitors.

Release date: It is expected to be made available for purchase by the end of 2016.